The Watsonia RSL Pipes & Drums Band was formed in July 1991 after a meeting in a room under Ian Gray’s house.
Those present were;

All were talented and experienced bandsmen who had become dissatisfied with their current bands and eager to branch out on their own. Ian Gray was elected the founding Pipe Major of the band.

The band initially practiced at the Diamond Valley Community Centre for about 3 months before moving onto Banyule Secondary College, Banyule Scout Hall and Bulleen Scout Hall respectively. Since 1998 the band has used the Red Cross Centre at Heidelberg Repatriation Hospital.

The band encountered many problems in its early years, primarily because of the lack of financial support. Founding member David Rushford was the driving force behind our sponsorship, and subsequent naming of the Watsonia RSL Pipes and Drums. He spent many nights at the RSL promoting the merits of them sponsoring their own pipe band. In September 1991 the band formally applied for sponsorship to the Watsonia RSL, making it the first RSL band registered with the VPBA.

As well as being negotiator, David Rushford was the bands first President. Other officials were;

The band’s first paying engagement was for Kilmore Hospital and Nursing Home; we had 2/3 players from Footscray Pipe Band and 2/3 from Frankston RSL helping us out. After the first play out, the band was then asked to play in the club rooms on social nights and after the ANZAC Day March in 1992.

In 1994/1995 it was decided the band required its own uniform rather than continuing to use donated pieces of other bands’ uniforms. At a Christmas barbecue, three tartans were presented for selection, and the Ancient Macbeth was chosen. With the sponsorship money assured, the band was now able to get cap and sporran badges made and Watsonia RSL belt buckles and kilt pins. From this point till 2016 the uniform has remained as:

The band’s next challenge was competition and we entered mini bands at Melbourne, Bendigo and Ballarat with reasonable success at each venue. Next we tackled full band competitions. After two uneventful seasons, we secured the services of Alan Anderson of the Victoria Police Pipe Band as a pipe tutor. In 1997 we started off by winning South St Ballarat, placed at Daylesford, won Berwick and Nunawading, came second in Geelong, won Ringwood and capped it off by becoming Australian Grade 4 champions at Newcastle in April 1998, under the leadership of Dennis Bull as Pipe Major, and with the service of Ross Bates (also of the Victoria Police Pipe Band) as tutor. We were promoted to Grade 3 in season 1998/1999 but did not do too well, and were relegated back to Grade 4, after which we won Grade 4 at Nunawading in 2000.

Since then the band has gained much success in competition with two consecutive winning seasons in Grade 4 and a regrade to Grade 3 in 2009. The band has risen to the challenge and came in 1st at their first Grade 3 competition in Daylesford in 2009. Due to struggling number in the bands drum corp, as of 2015 the band has be re-graded from Grade 3 to Grade 4.

From ANZAC Day 2016 the band underwent some changes to the uniform. The current uniform is now: 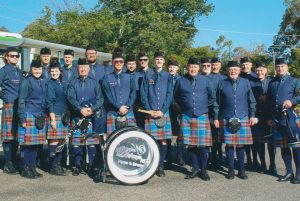 Sponsored by Watsonia RSL
Sub-branch of the RSL